On Saturday, February 6th the Benton American Legion Post 280 & VFW Post 2671 are proud to host our first ever Four Chaplains Day Ceremony.  This ceremony honors the memory of the Four Immortal Chaplains of the USAT Dorchester who lost their lives in the early morning hours of February 3rd, 1943 off the coast of Newfoundland, when the German submarine U-223 struck the Dorchester with torpedo's.
Army Chaplains George L. Fox (Methodist Preacher), Alexander D. Goode (Jewish Rabbi), John P. Washington (Catholic Priest), and Clark V. Poling (Dutch Reformed Minister), distinguished themselves by helping to save the lives of many who survived the sinking by giving away their own life vests, as well as other articles of their own clothing.  In the last moments of their lives, witnesses report that these four brave men of different faiths interlocked their arms, and sang hymns in their own languages with men gathered around them as the ship slipped below the waves.
Brunch will be served beginning at 9:30am and the ceremony will begin at 11am.  This is a free event and Open to the Public.

This inter-faith ceremony will include guest speakers to represent each of the Chaplains. 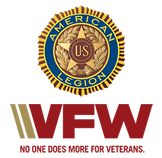